The splash pool will now be closed until May 2022. 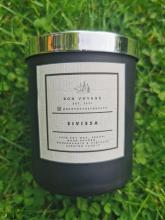 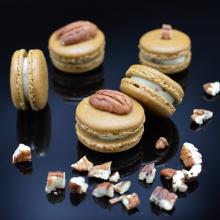 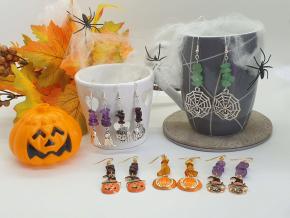 2 October is #bishopsstortford Farmers and Crafts Market! Come to North Street between 9:30 and 1:30 to check out our traders wonderful handmade products!

We hope to see you there! #mymarket 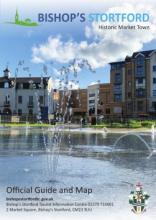 Bishop’s Stortford has something for everybody. The traditional town centre still
features a bi-weekly market, but also has a convenient and modern shopping centre.
Bishop’s Stortford’s idyllic countryside setting allows for walks through its green spaces
and river which runs throughout the town. There are a variety of attractions which are
suitable for all of the family, and plenty of events for arts and history lovers.

Physical copies of the map and guide are avalible at the Tourist Information Centre for free.

NOTICE OF CONCLUSION OF AUDIT

1. The audit of accounts for Bishop's Stortford Town Council for the year ended 31 March 2021 has been completed and the accounts have been published.

2. The Annual Governance & Accountability Return is available for inspection by any local government elector of the area of Bishop's Stortford Town Council on application to:

3. Copies will be provided to any person on payment of £0.15 for each copy of the Annual Governance & Accountability Return.

View the Notice of Conclusion of Audit and the Audited Annual Governance & Accountability Return 2020/21.

The deadline for applying for a share in £250,000 available in capital grants to fund sports facilities serving the town, and for registering an expression of interest in future funds which are likley to become available, has been extended.  The new deadline is 15th September 2021.  Full details are available here

Bishop’s Stortford Town Council is seeking sites suitable for burials to ensure that it can fully evaluate all options for the continued provision of a burial service to the residents for the future, and is inviting landowners who own and are prepared to sell suitable plots of land to come forward.

To be considered the land must

Should one or more suitable sites be identified the Town Council may consider purchasing the site or a part thereof for fair value.  The Town Council would regard any land used for burials as ‘amenity land’ and would be looking to negotiate a price commensurate with this use.  For the avoidance of doubt it would not be expecting to pay a price similar to that which might be expected for land suitable for housing development.

Anyone who wishes to put forward a site in response to this call is requested to do so no later than 24th September 2021 accompanied with the following information:

Information should be sent by email to the Chief Executive Officer – james.parker@bishopsstortfordtc.gov.uk

Should any landowner or agent wish to discuss this matter they are invited to call the Chief Executive Officer directly on 01279 712147.

This call does not indicate any commitment on the part of the Town Council to purchase land for the purpose identified; the acquisition of additional land is just one of the options that the Town Council is considering to ensure that it can continue to offer burials to its residents.

Bishop's Stortford Town Council is inviting tenders for landscaping and related works to create an extension to and parking space at the cemetery.  More details are available here 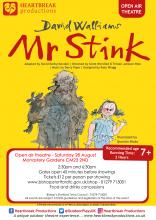 Watch David Walliams “Mr Stink” come to life in the Monastery Gardens on 28 August. Two performances will be performed by a professional touring theatre company. You can also treat yourself from the food and drink vendors- sit back, relax and enjoy the show! Performances are at 2.30pm and 6.30pm.

Mr Stink is about a daydreaming schoolgirl Chloe who befriends a stinky homeless man Mr Stink and his dog in the local park. In uncovering Mr Stink's sad past, she ends up on a journey that takes her to Number 10 Downing Street and eventually brings her dysfunctional family together.

Tickets are £12.00 per person. Tickets can be purchased here: https://www.bishopsstortfordtc.gov.uk/shop/

Further information click here. FAQs regarding this event can be found here

Bishop’s Stortford Town Council has announced the availability of up to £250,000 (in total) in grants to sports clubs and other sports bodies in the town.  The grants will be awarded to fund capital projects which have been fully costed and can be completed no later than 31st December 2023.  Applicants must demonstrate that there is a need for the investment requested, that it will directly benefit the residents of the town, and must to show how the project contributes to sustainability.  In addition to applications for the funds now available, the Council is also inviting ‘expressions of interest’ from sporting bodies which have ideas that are insufficiently mature to qualify for the present round of funding.  These ‘expressions of interest’ may be eligible for future funding and will contribute to the Council’s thinking on the development of sporting facilities.

The grants and request for expressions of interest form a component of the Town Council’s strategic plan 2019-2023.  This plan includes investments in its cemeteries, allotments, recreation areas, the riverside and town centre, cycle infrastructure, sport and the arts.  Over £1M has been allocated already from a variety of sources including the ‘New Homes bonus’ and ‘S106’, both of which are  funds becoming available as a consequence of development and the Council will receive, during the period up to April 2026, a further £6.5M from the sale of the land now occupied by the Avanti Meadows Primary School.  This must be spent on capital projects and it is likely that a proportion will be allocated to sport.  The Council is considering investing in a sports centre to the North of the Town and is currently undertaking preliminary studies to establish the feasibility of such a venture.  The responses to the grants and ‘expressions of interest’ announced today will also help inform this potential project.

Cllr Keith Warnell, the Town Mayor says ‘the announcement of this tranche of grant funding is a first step by the Town Council in stimulating the next phase development of the Town’s Sports facilities.  It complements the activities of East Herts District Council and of course the excellent sports bodies in the town.  Its pleasing to be able plough back some of the proceeds of development in this way and we are looking forward to hearing from the sporting bodies with their plans and aspirations.

Application forms both for the grants currently announced and expressions of interest are available at www.bishopsstortfordtc.gov.uk/grants and responses must be received no later than 15th September 2021.